It was a passing comment; a thought that escaped to the tongue, just looking for a reaction, not really expecting anything, not even being totally serious:

“Let’s ride our bikes to visit your mom in Florida! There’s this thing called the East Coast Greenway, it’s a bicycle route that takes you from Maine to Florida- we could spend the summer doing that!”

I knew he wouldn’t go for it. As much as he loves cycling (way more than I do), I knew it was almost like an “impossible” thought.

But then he countered it with “Maybe we could bike to NYC. You wanted to visit this summer, I think it’d be more realistic than going all the way to Florida”.

I don’t exactly remember the moment that led us to actually deciding that we were going to do it. But somewhere along the way of finding stranger’s backyards to camp in and making the route and calculating the daily mileage, we found ourselves packed and ready to leave on the morning of July 16th. 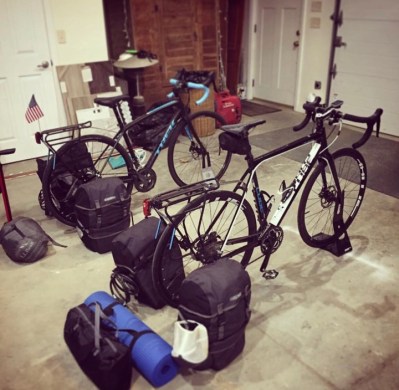 Thinking back, it’s all so surreal. We rode our bikes over 100 miles the first day (let’s just say I will never be allowed to calculate mileage again).

That day was met with an unexpected “turn around” trip- we made it about 3 miles out and after nearly being blown over from the wind of vehicles rushing by, I knew I needed to lighten my pack. We turned around, I unloaded about 4 outfits, a pair of shoes, and quite a few snacks. I felt moderately better. I was scared. Terrified, actually. I was going to travel 500+ miles, on a bicycle, sleeping outdoors, in stranger’s houses; I was worried about the weather, I was worried that I couldn’t do it, I was worried that something would happen and I wouldn’t know what to do- I literally, never in my life, thought I was actually going to do this. I stalled as long as I could before I knew that stalling any longer was not going to change anything. We were going to do this. And as scared as I was, I was also excited. What an experience we were about to have. This guy I’d only been dating for 6 months, we were about to spend every single waking minute with each other, with no real distractions, nothing else to occupy our minds. I was thrilled to bond with him on such a level that I never would have expected. His smile and excitement was so contagious, I had to swallow my doubts, worries, and insecurities and just go with it.

That first day was exhausting enough to wonder if we should really continue. 109 miles. I think I mentally quit the second it got dark and we had to bike in the misty rain along the bike path in Portland, Maine- which is, SKETCHY AF in the day time, let alone at night (IN THE RAIN). By the time we got to his cousin’s house (one of the 3 people we really “knew” along this journey), I in no way wanted to wake up the next day and do that all over again. But we had to. The route we had planned out didn’t allow for any “breaks”. We had a destination every night, and we needed to make the miles.

The next 10 days were filled with ups and downs (literally…SO MANY HILLS), warm, drenching rain, beautiful sun(burns), laughs, tears (from me, not him), crankiness (both of us), silence (he’s so fast, and I’m well, not)…I was so mentally unprepared for the amount of “alone” time I would actually have on this trip. Though we were together for the entire time, often we rode in peace, listening to the sounds of nature around us. This was hard for me, as I am a conversationalist. Silence scares me. Silence feels like something is wrong. Silence makes me uncomfortable. Silence gives me too much room to think and wonder. But this trip forced me to embrace the silence. Somewhere between Maine and New York I found myself face toward the sun embracing the rays beating down on me, enjoying the sounds of the wind softly rustle the trees along the countryside roads that were barely traveled. I smiled when creatures crossed ahead of me and when kind drivers moved over to give me space.

Of course there were times we spoke. We laughed whenever we came upon a hill. We made snarky comments whenever a driver went too fast past us, or worse, didn’t even move over. We called out to each other whenever we were passing a farm or some other beautiful scenery. We were constantly trying to figure out where and what we were going to eat. We stopped at way too many gas stations and spent way too much money on Gatorade. I always think that “getting to know someone” involves diving in to their past, having “those conversations”, giving them little “tests” to see what they’ll do or how they’ll react (you know, the old “I’m cold” trick to see if he’ll give you his sweatshirt or put his arm around you); but we learned a lot about each other through our snack-time conversations under the trees, when we’d ride side-by-side down long stretches of farm house roads, or late at night while we listened to the strangers around us live their daily lives; and in these conversations we spoke more about the present and future than anything.

This trip led us to so much more than just New York City. This trip led us to doorsteps we’ve never known. To games we never thought existed. To too many Home Depots. To movie scenes we may never see again. To ice cream flavors we could only have ever imagined up.

We watched the sun set and slept under the stars down in Cape Cod. We bought  $5 towels from a camp site and $10 beach chair pillows from a Rite Aid at because we forgot our own. We camped in the backyard of a stranger who then made us breakfast the next morning. We played board games with children and slept on pull out couches. We went for ice cream and beer tasting and shucked corn with strangers who have since invited us to go to Iceland with them. We had a fire and wine and too much pizza with the parents of one of my sorority sisters. We stayed in a few airbnb’s and had fun trying to bring our bicycles up 2-3 flights of stairs. We rode our bikes in Central Park and walked all around New York City. We got on a train at 3am and made our way back home- a home that we had only moved in to a week before hand. 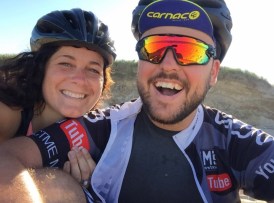 Our bicycles are not done (though our pack racks are completely out of service). Since this trip we have decided to make our summer 2019 just as memorable. We will ride from Burlington, VT to Quebec. I guess I better brush up on my French 🙂